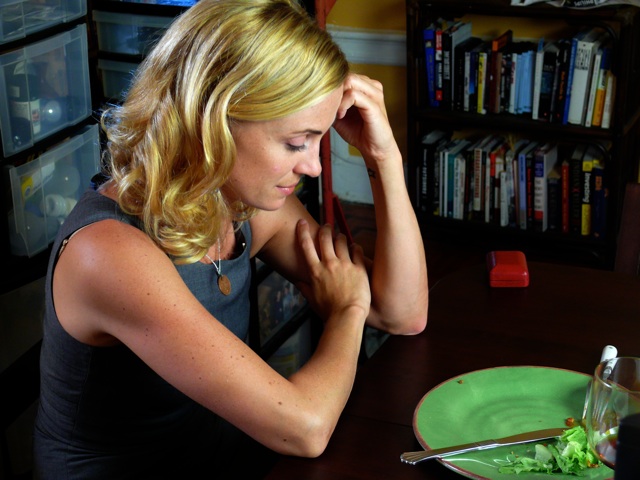 Kelly Sullivan on the set of “Found In Time”

Actors are the butt of many jokes – among the crew, the producers, or a group of directors sitting at a bar together. Even actors like to make fun of themselves.

We all know the stereotypes: the temper tantrums. The lateness. The preparation (“what’s my motivation”). The arguments with the director. The insistence on Evian water. The personal assistant that gets foisted on the production. How many non-film people saw/heard Christian Bale’s rant in Terminator: Salvation and thought: what an asshole?

The truth is that being an actor is a hard job. And your cast are the first elements of your film (after the credits) that your audience sees. They’re the gateway through which they connect to your story. While actors aren’t hauling 5-band cable around – a different kind of hard work, which should be better rewarded, but that’s a different story – they have to immerse themselves into another character, then stop and “reset” during the seemingly interminable times between takes and setups.

For each scene, an actor has to figure out:
* Where the character is in the story (difficult since films are shot out of order);
* What just happened (which may not have been shot yet, or may have happened off-screen);
* Where their marks are and what the blocking is;
* What the beats of the scene are (subtext);
* What their relationship is with their scene partner(s), and what the backstory is to those relationships;
* What physical elements are going on with the character in general (speech defects, accents, old injuries) or in the scene in particular (new injuries, when was the last time the character ate/slept/had sex, etc.)
* The specifics of their character’s profession (at least enough to make it look believable)
* What the director wants, even if the director isn’t being terribly helpful
* What the writer seems to want to happen in the scene, even if the dialog sucks
* What the DP wants
* What their character needs from everyone else in the scene (objective);
* Stunts, specific actions, lyrics (if they’re singing)

The role that an actor takes on is built from many processes – training/script analysis; collaboration with the director and crew; research; interaction with the other cast members (“chemistry”); and his/her own life and personality. When you are your instrument of artistic expression, the separation between you and your art is thin, perhaps at times even non-existent. You can’t take off your body the way you can put away your saxophone or shut down your laptop. This can really feel threatening and scary, especially if you’re playing a character that seems on the surface so different from you. Some actors seem to be able to shrug it off, others self-medicate between roles, and others find a way to integrate their the characters’ persona with their own.

At the end of the day, actors are called on to do what most of us avoid: walk into emotionally risky situations and work with them. So they sometimes act a little different from the rest of us as a result.

What do you do as a director, then, when your actor is behaving in a way that others might call erratic or irresponsible? Listen to what they’re saying, and ask questions. Most actors want to do a good job, and if they’re having trouble and “being difficult,” it’s quite possibly because they’re stuck on something. It’s your job to get them unstuck.

It’s also possible that there really is something on set that’s bothering them unnecessarily. I once line produced a film where the lead actor was a vegan. He was too nice to tell anyone this, so he didn’t eat breakfast two days in a row. We were shooting out in the middle of nowhere, so catering options were slim but the cook would have probably been able to prepare something. Instead the actor kept it to himself – and his performance in the morning kept getting worse and worse. So sometimes you just need to make sure they’re fed properly.

Other times they’re pushing and testing your authority, so you have to be a little firmer. There’s a way to do this without cramping the actors’ styles. It’s a tricky balancing act, and some people like conflict. Warren Beatty and Arthur Penn had an argument every day while shooting Bonnie and Clyde, and they both said it was a great experience. Other actors need to be told what to do a little bit – what the guidelines are – and then they’re fine. Others just need some coaxing and encouragement.

I’m still a newbie when it comes to directing actors, so I don’t have all the answers. But my favorite directors to work with always seemed to know what the cast needed and how to give them the right “nudge.” It’s not fair that the cast get treated better than the crew in many respects, and that their safety and comfort is more paramount than that of the crew to many producers. But the cast do have hard work to do, and if you can accept that, then you can look beyond the stereotypes and see them for what they are – people just like us.